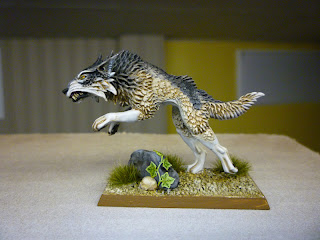 I don’t know about you, but when I picture a dire wolf, it is not as a creature that shambles along, sloughing pieces of itself and fertilizing the landscape. My vision of a dire wolf is that of a sleek and very large canine predator, capable of reducing men to urine soaked pants and tears just as easily as turning them into bloody ribbons upon which the pack will feed. One of the latest incarnations of this comes from the mind of George R.R Martin, in the form of house Stark and their pets, while many years ago my mind brought to life the descriptions found within the odd Dungeon and Dragon monster manual. Or, does anyone remember the reference to a Vulg?

Helping bring this vision to life is the new “Fenris” wolf kit made by G.W. It is meant as a 40k model, but thanks to the lack of mechanical bits, and lasers attached to their backs, it can be used so very easily within a fantasy setting. All that is lacking are cavalry bases, which I happened to have extra of.
My personal vision for these “dire wolves” is of massive creatures that roam the hills and forests from whence my undead army general hails. Instead of undead wolves being raised to serve the master, I picture an unholy pact between these living creatures and the vampire lord. Perhaps it’s a mentally sent command, or the ability to speak the tongue of beasts, but these living creatures roam the outer edges of the army, seeking, hunting, and hungry, ever hungry.
Speaking of hungry, here is the first wolf, up to table-top standard...which is as far as I want to go with him. The rest of the pictures are a bsic step by step, as I made it as easy on myself as possible to paint these creatures.
Cheers,
Bard