Tick Tock, time has passed me by

What a horribly long absense, and I am sure my post here is just a short return. Work has been wonderfully chaotic as I have gone through some major changes including location and new work team.
My little girl is now a very busy 15 month old and as soon as I get home from work, thats where my attention goes. Of course a person does not want to ignore their better half either, and so as soon as little person is in bed, some time is spent with the wife. Then you suddenly realize there isnt much time left to your evening.
The small amount of hobby time I have managed to squeeze in between life, a new Ipad, friends etc has netted me a couple of things though...

1) I have managed to paint a bit more for my small nurgle demon force. I will be creating a painting guide for them as soon as I have the oppertunity. I have several demons waiting for a spary of primer and these will make perfect candidates for a step by step photo shoot.

2) The release of 40K had me brush some dust off old figures. I was pretty excited (less so now after reading the chaos codex) and wanted to see what I had in the shelves. Turns out I had alot! Almost 160 unassembled Imperial Guard models and a fair bit of chaos marines.
I decided fairly early on that I would revist chaos by getting my guard ready to visit the dark side and the perfect compliment would be a force of Alpha Legion space marines. Models were prepped and painting guides were downloaded, and I did a test model. I will post some pictures of the model, but as it didnt look like the step by step of the guide for some reason, I became a bit less enthusiastic.
As soon as my enthusiasm withered in that direction, I rediscovered some of my old half painted Plague marines. I repainted some of them in browns and not my typical green. I like them and they might prove to be the motivation I need to keep plugging away at this time. 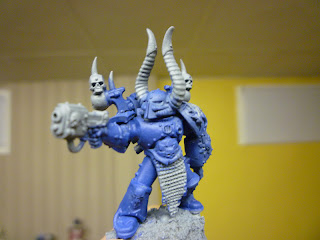 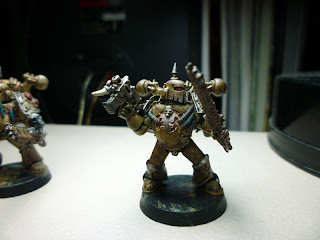 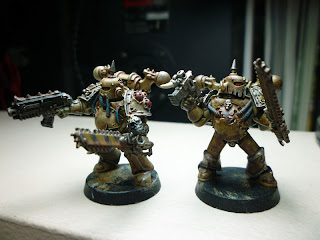